I initially studied psychology at the Free University of Berlin and received my majors in 2012. Right from the beginning, I yearned to study in Paris for a year. However, this never came to fruition – instead, I was pulled to French-speaking Switzerland for a year. Looking back, this turned out to be a very fortunate turn of events! In Lausanne, I encountered a genre of film that I had not experienced in this capacity in Germany: the feature-length documentary.

As thrilling as a motion picture and as touching as only real life can be – this was true love.

Back in Germany, a number of internships and jobs at documentary studios and TV production companies ensued, including such companies as INDI FILM in Berlin/Stuttgart and TELLVISION in Munich. In 2014, I was called in to the SWR Television’s cultural documentaries editorial department in Baden-Baden, southern Germany. There, I started working as an editorial associate before becoming an editor. I was responsible for planning SWR Kultur’s Sunday program called Kulturmatinée, as well as working on documentary and cultural documentary productions for SWR Television, Das Erste, and ARTE.

The ARTE online platforms (most importantly, ARTE Creative) led me to the vast depths of the internet: true love, anew. I especially enjoyed working on transmedia ideas ever since. This included work as an editor for the SWR/ARTE coproduction SOUNDHUNTERS in 2015 (Prod.: a_bahn), followed by BOOK & AWAY in 2016 (Prod.: Florian Film), likewise in collaboration with ARTE.

Then, Virtual Reality entered the scene – growing in size, garnering attention, and improving on a technical level. It just wouldn’t let go of me anymore. I finally launched VR Geschichten in May of 2017 and have since been discovering the breadth of virtual storytelling from my base in Berlin.

In early 2020, I left the TV world (my last position was as editor at the DW, the international German broadcaster) and started my new life as a full-time freelancer. Now, I happily work as content writer for companies and institutions with a focus on technology, media and – for sure – Virtual and Augmented Reality. Aditionnally, I help XR creators as storytelling consultant to create more compelling stories and a deeper immersion for their users. 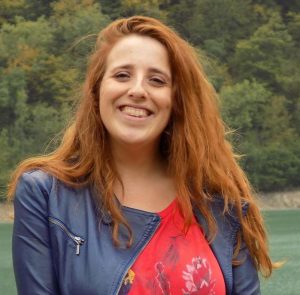 I spent my childhood exploring abandoned mansions, rescuing stray dogs and watching movies. “The Empire strikes back” changed my forma mentis. Now, I live for redemption arcs and plot twists. Action movies where cool guys don’t look at explosions are my guilty pleasure and Les Misérables, in all its forms, is my favourite thing in this whole wide world.

I have a master degree in Social Psychology and Psychology of Communication and I’ve been working in social research for the past decade, even if my passion is to study fan culture dynamics and fan communities. In 2014, some friends and I joined forces and, driven by this common interest, we founded fanheart3, a cultural association dedicated to fans and their artistic productions.

When in 2017 I met the XR world, I did not know what to expect. But then Mathias Chelebourg and Marie Jourdren’s Alice the Virtual Reality Play turned me into Alice, sent me to Wonderland and gave me the chance to talk with the Caterpillar. It was love at first sight. The feeling of having lived the story – not only with my mind and my heart as I was used to do as a fan, but also with my body and my presence – was so intense and exciting that I kept talking about it for days (sorry to all who were there at the time, I hope you still love me).

I have spent the last three years learning about this “new” world from extraordinary people and enjoying the most mesmerizing immersive experiences. In a world of brilliant storytellers, I became a storylistener to have the chance to learn from others about their memories and dreams. And I became a writer to share all this with the world out there. Because some dreams… some passions, well, they are just so worthy of being known.

I leave the tech talk to those who are more experienced in merit than I am. To me, a humble user and a devoted fangirl, the magic of XR is mostly in the way it talks to you and lets you talk. And – even more than that – it is in the way it can make each one of us part of the narrative.

As someone who has been spending such a long time observing (and often joining) audience dynamics and studying what makes people fall in love with a media production, I recognize an immense potential in XR.

I strongly believe that – with the right stories, the right characters, and the right emotions – this medium will boldly take us where no man has gone before. Ten points to you if you get that reference.